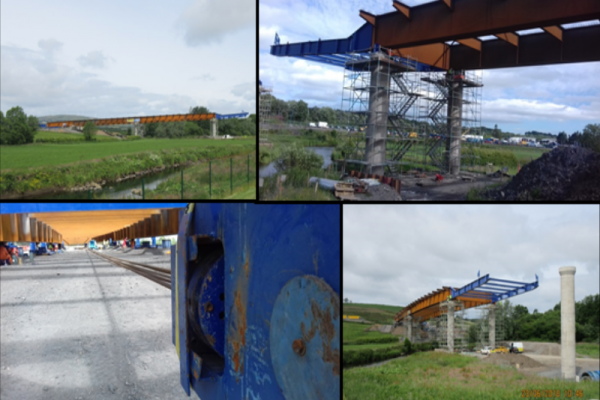 The Phase 1 launch of the River Garnock Viaduct commenced at noon on Friday 22 June on the £31.2m A737 Dalry Bypass project being delivered by Farrans Roadbridge JV on behalf of Scottish Ministers.  Mouchel Fairhurst JV site staff are monitoring construction of the works.

The Phase 1 launch was planned for a two stage progression. The 650 tonne ladder deck was launched 62m to a position 5m beyond Pier 1 on Friday.  The 58m second stage of the launch commenced at 8am the following day, with the structural steelwork progressing to Pier 2.

The launch was completed as planned within 24hrs of commencement and without any major interruptions or adjustments.

Now for the technical bit ….