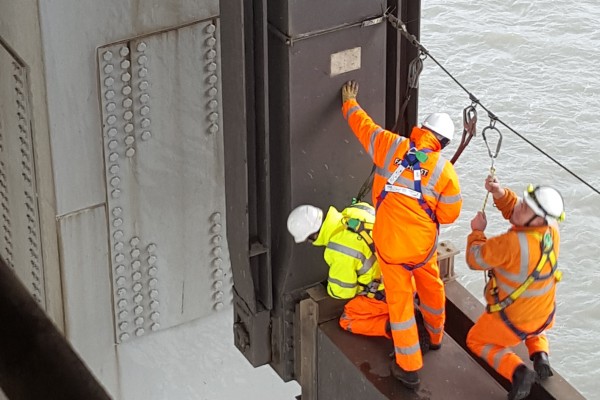 Fairhurst are proud to be the designers of the Forth Road Bridge: Truss End Repair that won the 2016 Saltire award for the Greatest Contribution to Scotland. Client Transport Scotland, Designer Fairhurst, Cat III Checker Arup and the Forth Bridge Operating unit Amey collected the award at the ceremony in Edinburgh on 25 October.

On discovery of the broken section of end link at the north east tower of the Forth Road Bridge in December 2015, Amey appointed Fairhurst as designer to develop the repairs required to stabilise and restore the load carrying capacity of the 1.8km suspension bridge.  With this important link in Scottish road network closed to traffic, time was of an essence and Fairhurst staff worked tirelessly to deliver the design and supervise the transfer of load from the damaged elements of the bridge to the repairs so that the bridge could be re-opened to traffic.  By Christmas the bridge was open to cars with heavy goods vehicle traffic returning to use the bridge in February 2016.  The judge’s comments were:

‘The project demonstrated a remarkable engineering achievement carried out during a period of adverse weather conditions, whilst ensuring public safety and the structural integrity of the bridge.  The expertise and dedication shown by the site team enabled completion ahead of programme and this alleviated the prolonged economic, social and environmental impacts associated with diverting over 70,000 vehicles distance of 33 miles each day.’

The truss end links form the connection between the deck structure of the bridge and the main towers.  They provide vertical support for the end of the stiffening truss while allowing the truss to move longitudinally under traffic, wind and temperature loading.  Located 50m above the Forth, each truss end connection is formed from a pair of link members, either side of the truss end post, which are connected to the truss and the main towers by pins which allowed the links to swing accommodating the movement induced at the end of the deck.  The weld failure occurred at the point where the main span was connected to the north main tower on the south bound carriageway.  Visual inspection revealed that the weld which connected the connection block of the link member to the bottom pin on one side of the truss had completely failed leaving the truss supported by the other link member at this location.  Cracks were also found in the same weld on the other link and this lead to the closure of the bridge as failure of the remaining link would have resulted in the deck locally dropping and forming a step in the carriageway.

To restore the connection and secure the same welds on the other link members Fairhurst engineers derived the concept of installing a frame welded to either side of the link member which passed under the connection block of the failed pin.  The arrangement allowed the failed connection to be jacked together restoring the load in the link.  Once this was done the new frame was secured in place by tapered plates which were fully welded to secure them.

In parallel to the design of the frame to restore the existing links assessment was undertaken to establish how the pins were moving at all of the truss end links.  This assessment indicated that the pins were not moving freely.  As a result Fairhurst designed a secondary system to support the truss ends which was installed on the main spans.  This system is designed to carry the full load of the bridge and also acts as temporary support which would allow the future replacement of the original truss end detail.  The dead load from the truss ends was jacked into the secondary system to engage it with the truss plus relieve load in the original links.  Should the original links fail for any reason the secondary system is designed to support the entire load allowing the bridge to remain operational.

Fairhurst, Transport Scotland, Amey and Arup worked collaboratively and effectively to quickly arrive at a practical solution that went through the approval in principle, detailed design, cat III check and installation process within a few weeks. The second phase to provide secondary support was complete by February 2016 and work has just started on site installing Fairhurst’s design for the permanent repair that introduces a more conventional bridge bearing plus includes access platforms to allow future inspection and maintenance.